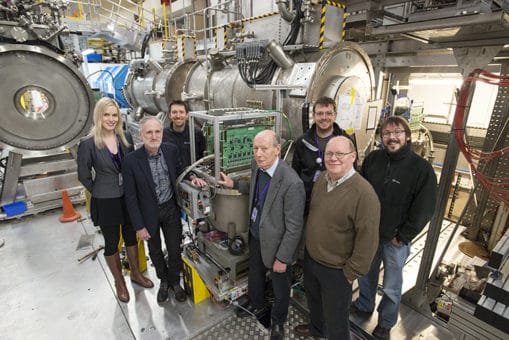 MICE, Muon Ionisation Cooling Experiment, team at the facility during construction at STFC's Rutherford Appleton Laboratory, 11th February 2015. The experiment is designed to demonstrate the concept of ionisation cooling of muons to maximise the number of muons available for acceleration, storage and the eventual production of neutirnos in a Neutrino Factory.

For the first time scientists have observed muon ionization cooling – a major step in being able to create the world’s most powerful particle accelerator. This new muon accelerator will give us a better understanding of the fundamental constituents of matter.

Since the 1930s, accelerators have been used to make ever more energetic proton, electron, and ion beams. These beams have been used in practically every scientific field, from colliding particles in the Large Hadron Collider to measuring the chemical structure of drugs, treating cancers and the manufacture of the ubiquitous silicon microchip.

Now, the international Muon Ionization Cooling Experiment (MICE) collaboration, which includes many UK scientists, has made a major step forward in the quest to create an accelerator for an entirely different sort of particle, a muon. A muon accelerator could replace the Large Hadron Collider (LHC), providing at least a ten-fold increase in energy for the creation of new particles.

Until now, the question has been whether you can channel enough muons into a small enough volume to be able to study physics in new, unexplored systems. This new research, published in Nature today, shows that it is possible.  The results of the experiment, carried out using the MICE muon beam-line at the Science and Technology Facilities Council (STFC) ISIS Neutron and Muon Beam facility on the Harwell Campus in the UK, clearly show that ionization cooling works and can be used to channel muons into a tiny volume.

“The enthusiasm, dedication, and hard work of the international collaboration and the outstanding support of laboratory personnel at STFC and from institutes across the world have made this game-changing breakthrough possible,” said Professor Ken Long from Imperial College London, spokesperson for the experiment.

Dr Chris Rogers, based at ISIS and the collaboration’s Physics Co-ordinator, explained: “MICE has demonstrated a completely new way of squeezing a particle beam into a smaller volume. This technique is necessary for making a successful muon collider, which could outperform even the LHC.”

Muons are produced by smashing a beam of protons into a target. The muons can then be separated off from the debris created at the target and directed through a series of magnetic lenses. Because of this rough-and-ready production mechanism, these muons form a diffuse cloud – so when it comes to colliding the muons, the chances of them hitting each other and producing interesting physical phenomena is really low.

A major obstacle to cooling a muon beam this is that muons only live for two millionths of a second, and previous methods developed to cool beams take hours to achieve an effect. In the 1970s a new method called ‘ionization cooling’ had been suggested, and developed into theoretically operable schemes in the in the 1990s. The hurdle of testing this idea in practice remained formidable.

The MICE collaboration developed the completely new method to tackle this unique challenge, cooling the muons by putting them through specially-designed energy-absorbing materials such as lithium hydride, a compound of lithium metal and hydrogen, or liquid hydrogen cooled to around minus 250 degrees Celsius and encased by incredibly thin aluminium windows. This was done while the beam was very tightly focussed by powerful superconducting magnetic lenses. The measurement is so delicate that it requires measuring the beam particle-by-particle using particle physics techniques rather than the usual accelerator diagnostics.

After cooling the beam, the muons can be accelerated by a normal particle accelerator in a precise direction, making it much more likely for the muons to collide. Alternatively, the cold muons can be slowed down so that their decay products can be studied.

Professor Alain Blondel, spokesperson of MICE from 2001 to 2013, and Emeritus Professor at the University of Geneva, said: “We started MICE studies in 2000 with great enthusiasm and a strong team from all continents.  It is a great pride to see the demonstration achieved, just at a time when it becomes evident to many new people that we must include muon machines in the future of particle physics.”

“In this era of ever more-expensive particle accelerators, MICE points the way to a new generation of cost-effective muon colliders,” said Professor Dan Kaplan, Director of the IIT Center for Accelerator and Particle Physics in Chicago.

Professor Paul Soler from the University of Glasgow and UK Principal Investigator said: “Ionization cooling is a game-changer for the future of high-energy muon accelerators, such as a muon collider, and we are extremely grateful to all the international funding agencies, including STFC in the UK, for supporting the experiment and to the staff at the ISIS neutron and muon source for hosting the facility that made this result possible.”

“Demonstration of cooling by the Muon Ionization Cooling Experiment” was published in Nature on 5 February.