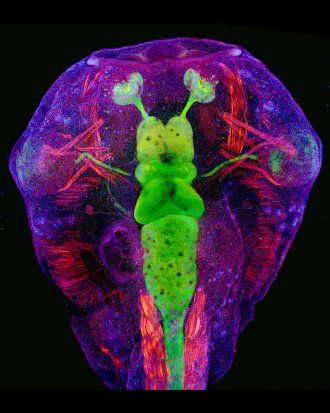 A new study of autism risk genes by UC San Francisco and UC Berkeley scientists implicates disruption in prenatal neurogenesis – a process in which specialized “progenitor” cells give rise to new brain cells – in the development of autism spectrum disorders (ASDs). The study also shows that estrogen, perhaps in a form produced within brain cells, can protect against this disruption and steer the brain on a normal course of development.

The most striking findings in the study, published Jan. 25, 2021, in Neuron, were derived from experiments using embryos of the western clawed frog (Xenopus tropicalis), a species prized by biologists for the unique insights it offers into development. Human genes involved in development have counterparts with similar functions in Xenopus, and extensive studies correlating human embryonic stages with those of the frog mean that genetic studies in Xenopus can have direct relevance to human development in both health and disease.

“Xenopus has been a cornerstone in developmental biology for many reasons, and a lot of what we know about human brain development is based on foundational research in frogs,” said Helen Rankin Willsey, PhD, a postdoctoral researcher in the UCSF Weill Institute for Neurosciences laboratory of co-senior author Matthew W. State, MD, PhD, the Oberndorf Family Distinguished Professor and chair of the Department of Psychiatry and Behavioral Sciences at UCSF. “The development of frogs’ brains is quite similar to that of humans, and many of the same genes, proteins, and molecules that shape the human brain do the same thing in the developing frog brain. These factors make Xenopus an attractive species to gain a deeper understanding of neurodevelopmental disorders.”

Piecing Together Genes’ Influence During Development

Over the past decade, genomic analyses of humans, including many led by State and colleagues, have identified gene mutations strongly associated with ASDs, allowing scientists to collectively assemble a list of dozens of “high-confidence” genes that confer significant risk of developing these disorders. With increasing knowledge of how, when, and where in the brain these genes exert their influence during development, autism researchers have begun to piece together in general terms what may go awry in ASDs.

Many of the identified mutations are in genes known to contribute to the formation and function of synapses – the sites of communication between brain cells – and also to affect the proper orchestration of which genes are ultimately translated into proteins. But the data underlying these conclusions come from disparate and incomplete sources, and these well-known risk genes are probably involved in different functions at different times during brain development.

As a direct test of these ideas, and to determine whether other developmental processes affected by these mutations may have been overlooked, Willsey, first author of the new study, turned to Xenopus, and brought together the State lab with those of renowned developmental biologist Richard Harland, PhD, the C.H. Li Distinguished Professor of Genetics, Genomics and Development at UC Berkeley, and UCSF’s Jeremy Willsey, PhD, assistant professor in the Institute for Neurodegenerative Diseases and the Department of Psychiatry and Behavioral Sciences, a leader in systems-biology approaches to neurodevelopmental disorders,

Helen Willsey and her research team first selected the “top 10” ASD risk genes identified in humans so far, and then conducted experiments assessing where and when their frog equivalents are activated in the frog brain during development. They found that all ten were expressed in the frog forebrain at a stage corresponding to human mid-prenatal development, which lined up well with computational analyses of autism risk genes carried out in 2013 by State and Jeremy Willsey, co-senior author of the new paper.

Xenopus females can lay more than 4,000 eggs at a time, which quickly develop into two-cell embryos large enough to be seen with the naked eye. Using high-throughput CRISPR gene-targeting technology, Helen Willsey’s team mutated each of the 10 genes in turn, but in only one cell in the two-cell embryos – with this technique, any developmental differences induced by the genetic modification would occur in only one half of the brain, while the other side developed normally.

The ability to easily compare the two halves of the brain made it clear that there were significant size differences in the side of the brain in which the genes had been disabled – when certain genes were mutated the affected half was larger, with others it was smaller. But cellular and molecular work revealed that all these size differences were due to skewing of the process of neurogenesis, which was reflected in atypical ratios of progenitor cells, the forerunners of brain cells, to mature neurons in the areas lining the ventricles of the forebrain.

Because the researchers are as interested in resilience – ways in which the effects of ASD genes might be overcome – as in risk, they tested more than 130 drug compounds in the Xenopus embryos. One, related to estrogen, restored a typical pattern of neurogenesis, with the resulting brain size matching on both sides of the animal. Conversely, when two other compounds that inhibit the estrogen pathway were tested, neurogenesis was more severely disrupted. Xenopus do not yet have gonads during the developmental stage at which the research team tested estrogen, so Willsey believes that estrogen produced locally in the brain, rather than in sex organs, may confer protection from disturbances in neurogenesis during development.

The protective effects of an estrogen-related compound were also seen in human neural progenitor cell lines in which various ASD risk genes had been inhibited with a special CRISPR technique, and also in similarly modified human brain organoids, 3D clusters of cells that scientists use to study tissue and organ development.

Willsey said that estrogen’s ability to reverse disparate effects on neurogenesis and brain size that result from the independent action of many different genes should provide reassurance in a field in which the rapid pace of gene discovery has led to worries that ASDs may be too complex to tackle with therapeutics.

Nonetheless, estrogen has profound effects on sexual differentiation during development, and Willsey’s team showed that it regulates neurogenesis through a master signaling pathway called Sonic hedgehog, which plays crucial roles in everything from brain development to limb formation. The team’s identification of estrogen as a protective factor, she said, should only be thought of as a scientific toehold on the problem that can guide the eventual development of safer, more targeted therapies.

“There are already so many confirmed ASD genes that it’s conceivable it is an intractable problem to come up with therapies that will be effective across broad groups of individuals,” Willsey said. “But this work supports that idea that we can get a handle on this. These genes do different things, turn different gears, but our findings ultimately point to a critical nexus of ASD pathology and reveal a previously hidden biological link connecting a highly disparate group of genes.”

Disclosures: State is a consultant for RBNC Therapeutics.