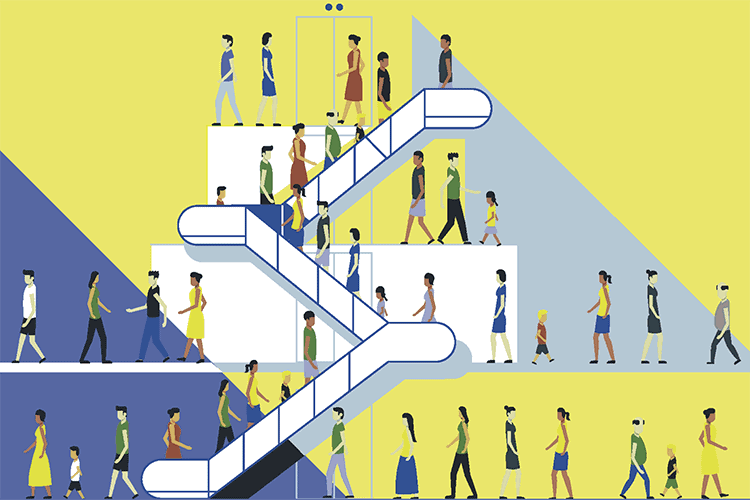 With a new fiscal year approaching, local governments around the country will begin having discussions and debates about how to allocate their budgets in the coming months, asking questions like: What programs should be funded or cut? How much money and resources should be given to these initiatives? Where should that money come from?

But for counties and municipalities seeking to achieve equity for their residents, these questions cannot be answered thoroughly without identifying the real racial disparities present within their communities, said Wendy Ake, director of the Just Public Finance project at UC Berkeley’s Othering and Belonging Institute.

Authored by Ake, a recent Othering and Belonging Institute study focuses on King County, Washington, where during the past four years government officials embraced the institute’s Targeted Universalism approach to crafting policy: A method that seeks to set universal goals for communities in an attempt to level the playing field for all residents, regardless of racial demography.

The approach also aims to help governments achieve racial equity by identifying racial disparities and closing those disparities by focusing on changing the systems and institutions that led to those inequities, said Ake, who refers to the process as “Equity 2.0.”

Through nuanced data analysis, Ake found disparities across race, class and education in King County that were not previously known. Some statistics showed that youth of color were six times more likely to spend time in a state or county correctional facility, workers making less than $25,000 a year were 10 times less likely to have health insurance, and children in south King County were twice as likely to drop out of high school as children in east King County.

That research is now being used to help King County restructure its budgets to address those disparities.

“In targeting structures, that structural change will end up benefitting more people than only those in the group facing the worst outcomes,” said Ake. “ … If we’re looking at systemic changes to get the outcomes we need, an uneven distribution of resources — in reverse — is not a radical idea, it is obvious and should not be controversial.”

Ake recently spoke with Berkeley News about the perception of resource redistribution, and how deeper and more analytical data is essential to maximize the impact of government budgets.

Berkeley News: What are some faults you see in the way local governments typically try to achieve equity in their communities?

Wendy Ake: The work around equity has become centered around closing disparities. Of course, knowing that information is very important. It brings people to the table, and it’s a way to see what gross inequalities and injustices are occurring for certain groups in a particular community. But to organize policy exclusively around closing disparities can have unintended negative impacts, and limit the kinds of changes needed.

The disparity data that governments typically draw from is often U.S. Census data that distinguishes groups based on their racial or ethnic identity. That’s useful, but not enough, in many cases.

For example, my Middle Eastern or Palestinian friends talk about choosing between the white or Asian box in some surveys — especially the census — and that box is not representative of the ethnic communities they actually come from. There’s no accurate box they feel they belong to. This can also be an issue for the fastest growing demographic in the U.S. right now, people who are categorized in surveys as “mixed” or “other.”

Another issue is if a program is focused on disparities, you end up talking exclusively about group-based disparities. Often, those groups on the losing end of those disparities are people that have already been marginalized. So, many people who need convincing that those groups deserve resources can become even more entrenched in thinking that those individuals are to blame for the disparity.

The saying that people need to pull themselves up by their own bootstraps is such a strong ethos and value in America. This kind of thought process is too common and is a huge impediment to building popular and political will to address what are really structural problems.

How is the Targeted Universalism approach different?

With Targeted Universalism, we remove those boxes and look more deeply at different groups and the places they live. We collect our data to find the real intersections in their identities — data that includes firsthand testimonies and community input.

This process will end up demonstrating that in the disparities data, the group, usually whites, that looks the best performing is also having problems, because that group isn’t monolithic, either. And this is an important point: We can’t let disparities data have the group with best outcomes become the outcomes all the groups strive to attain.

For the groups struggling, it can seriously limit what they aspire to and accomplish. You come to find that it’s not that there isn’t anything intrinsically or categorically different about individuals. What’s different is the legacy and experiences of how people are being treated by current institutions and systems.

So, once you start looking at this more nuanced qualitative data, you end up targeting structures rather than people: the disease, not the symptoms.

And, in targeting structures, that structural change will end up benefitting more people than only those in the group facing the worst outcomes.

What’s an example of a Targeted Universalism policy that was utilized in King County?

A lot of local governments have done initiatives around having these healthy or smart cities, and they get a budget that they distribute across the city evenly, without thinking about the specific needs of each neighborhood.

Kings County did a walkable cities project, and instead of just distributing the money evenly, they first did a deeper analysis.

Geography has a racial footprint related to various issues, but racial segregation more than anything else. Communities that are racially segregated have historically had less street maintenance and resources to revitalize neighborhood infrastructures.

For this project, King County’s budget office and their parks and recreation office had a requirement that they take racial equity into account. So, county officials did a Geographic Information System study to track all of the sidewalks and analyze populous areas that needed more investment than others. They also did outreach to community groups across the county to get feedback.

Through their analysis, of course, they found a correlation between where people of color were living and the lack of walkability and public parks. Those places needed more funds to make their neighborhoods walkable. Because of this extensive process of information gathering — that does cost time and money — they were able to direct those funds accordingly.

They understood that the previous policy structure of distributing these project funds was not working, so they made a change in their programmatic policy.

Communities of color historically have been marginalized and disadvantaged in America, and therefore, in this lens, struggle more. It seems through this Targeted Universalism that those groups would begin to get more resources than white communities because of that. What do you say to people who say these policies are socialist and sound like just another radical way of redistributing wealth?

Wealth has been unevenly distributed and unevenly extracted for centuries. And this is about more than workers in factories not being fully compensated for their work. We’re talking about colonialism writ large. Colonial nations built wealth and power by extracting wealth — with almost incomprehensible violence and brutality.

And now, as a direct consequence, entire continents and nations are stuck serving the role. For example, when exporting lower valued raw goods instead of more valued industrial products, finance systems deliberately create limits on how that could shift.

If we’re looking at systemic changes to get the outcomes we need, an uneven distribution of resources — in reverse — is not a radical idea, it is obvious and should not controversial. But it is, and that’s unfortunate.

Many of the changes we need to make in the U.S. could very well be implemented, while still maintaining a perfectly functional capitalist society from the standpoint of free marketeers.

It’s easy to see how a better health care system looks in other fully functional capitalist countries. Like in Vienna, Austria — which has a totally capitalist economy — where 60% of people there live in high-quality-luxury, publicly subsidized housing.

It’s something much worse, and it’s totally possible that it will get even worse.

The question isn’t about whether socialism or capitalism is better. The question is about who controls the forces of belonging and othering. That’s got to change. And that’s about much more than evenly distributing money.

When a city or county makes a policy change — through a Targeted Universalism framework — how do you measure the success of those policies moving forward?

Often programs are assessed by where resources are going. Local governments will address a problem and point to the money that was already invested to solve that problem — a problem that still exists.

It could be used as a public relations strategy for the government, rather than an effort to have long-term, durable structural change. But the Targeted Universalism framework is exclusively focused on outcomes.

Wealth has been unevenly distributed and unevenly extracted for centuries. And this is about more than workers in factories not being fully compensated for their work. We’re talking about colonialism writ large.”

You’ve got to see what the outcomes are and not just praise the input of funds or resources, assuming they will predictably impact better outcomes for everyone.

For instance, when talking about school funding and education, we discuss the outcome as the goal, not the funding of resources. The recent suit addressing the Detroit Public School District said that people should have an outcome: “We want our students in the public school systems in Detroit to be able to read.” That’s the goal — and a most basic one, at that.

That expected outcome is legitimate. So, to pull it off, Targeted Universalism would suggest that we look at disparities data to see the rough outlines of how far off different groups are from that outcome. It’s going to be the case that some students and schools are already reading at 100%, but some students are far from that and are going to need a lot more resources and different resources than other students.

That analysis will tell us what’s needed. Some of it we know from research, some of it we have to learn from communities themselves.

Whatever resources different groups need in order to reach the goal — that’s what we need to provide.

In that way, we could say the success is easier to track because it focuses on outcomes. The harder part of measuring can come from how to find information about how different groups are being made vulnerable in the current systems.

How can this approach to policy bring people from different demographics together?

Targeted Universalism is about opening up channels of power sharing. It’s not only about people of color having more agency and self determination to how their day-to-day experiences should be, but those groups should also hold sway in what other people’s lived realities look like.

Governments, local and federal, can really benefit by bridging across all racial demographics. Targeted Universalism is a good policy tool to make policy that can really improve outcomes —the literal comfort and quality of daily life and the length of those lives — for people who are more likely to have shorter lives and lives with greater struggle.

It’s a tool for policy to address political and popular will for strategies that can accomplish improving these day-to-day realities. And it’s a tool that can build more bridges and cross coalitions because of that, which is something that is so important now.