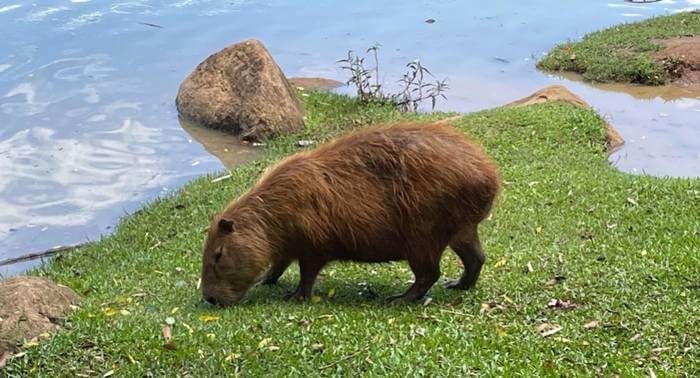 Converting agroindustrial waste into molecules of interest to society, such as biofuels and biochemicals, is one of the ways to mitigate dependence on oil and other fossil fuels. As one of the world’s largest producers of plant biomass, Brazil is well-placed to lead this transition, but lignocellulosic raw materials (containing lignin, hemicellulose and cellulose) are hard to deconstruct, or (more technically put) recalcitrant to microbial and enzymatic degradation.

Scientists in Brazil are looking to nature to find out how strategies to increase the availability of the sugars these materials contain can improve their depolymerization. In Campinas (São Paulo state), a research group at the Brazilian Biorenewables National Laboratory (LNBR), an arm of the Brazilian Center for Research in Energy and Materials (CNPEM), conducted an interdisciplinary study involving omics (genomics, proteomics, metabolomics, etc.) and synchrotron light, and discovered two novel families of enzymes with biotechnological potential produced by microorganisms in the gut of capybaras. CNPEM is a private nonprofit supervised by the Ministry of Science, Technology and Innovation (MCTI).

Both enzyme families act on components of plant cell walls and can therefore be used to produce biofuels, biochemicals and biomaterials. One of them also has potential applications in the dairy industry because it promotes lactose degradation.

“One of our research lines explores Brazilian diversity in pursuit of novel microbial mechanisms that reduce the recalcitrance of lignocellulosic waste. We noted that the capybara is a highly adapted herbivore capable of obtaining energy from recalcitrant plant waste and that it hasn’t been studied very much,” said Mário Tyago Murakami, LNBR’s Scientific Director and last author of the article reporting the study published in Nature Communications.

The capybara (Hydrochoerus hydrochaeris) is the world’s largest living rodent and very efficiently converts the sugars contained in plants into energy, although it is disliked in some quarters because it can harbor the tick that transmits Brazilian spotted fever, a rare but highly lethal infectious disease caused by the bacterium Rickettsia rickettsii.

“There are plenty of studies of ruminants, especially bovines, but information about monogastric herbivores is relatively scarce. Unlike ruminants, capybaras digest grass and other plant matter in the cecum, the first part of the large intestine. In light of their highly efficient sugar conversion, and because capybaras in the Piracicaba region [of São Paulo state] feed on sugarcane, among other plants, we started from the hypothesis that microorganisms present in the animal’s digestive tract might have unique molecular strategies to depolymerize this biomass, which is very important to Brazilian industry,” said Gabriela Felix Persinoti, a bioinformatics researcher at LNBR and corresponding author of the article.

The study was supported by FAPESP via a Thematic Project and a postdoctoral scholarship awarded to Mariana Abrahão Bueno de Morais.

The interdisciplinary approach used in the study included multi-omics (genomics, transcriptomics and metabolomics used to characterize molecular aspects of the capybara’s gut microbiota) and bioinformatics, as well as CNPEM’s particle accelerators to analyze the discovered enzymes at the atomic level. “I can’t recall any studies that have combined all these techniques, including the use of synchrotron light [a source of extremely bright electromagnetic radiation that helps scientists observe the inner structures of materials],” Murakami said. “In this research, our analysis drilled all the way down from the microbial community to the atomic structure of certain proteins.”

The scientists analyzed samples collected from the cecum and rectum of three female capybaras euthanized in Tatuí (São Paulo state) in 2017 under the local policy for controlling the capybara population. The animals were neither pregnant nor infected by R. rickettsii.

“The cecal and rectal samples were collected by abdominal surgery. The material was frozen in liquid nitrogen. DNA and RNA samples were extracted in the laboratory and submitted to large-scale sequencing using integrative omics,” Persinoti said.

They began by sequencing marker genes, in this case 16S, present in all bacteria and archaea. “With this first sequencing, we were able to detect differences between the cecal and rectal samples and to identify the main microorganisms in them. The gene 16S gave us a superficial answer as to which microorganisms were present and abundant to a greater or lesser extent, but didn’t tell us which enzymes the microorganisms produced or which enzymes were present in their genomes,” she explained. “For this purpose, we used another omics technique, metagenomics. We submitted DNA from the entire microbial community in the capybaras’ gastrointestinal tract to large-scale sequencing, obtaining a larger amount of data. By deploying an array of bioinformatics tools, we were able not only to identify the genomes present in each of the samples, and the genes in each of the genomes, but also to find out which genes were new and which microorganisms had never been described. In this manner, we were able to predict the functions of the genes that had the potential to help depolymerize biomass and convert sugar into energy.”

The researchers also wanted to know which microorganisms were most active at the time the samples were collected – in other words, which genes the microorganisms were actually expressing. To this end, they used metatranscriptomics, for which the raw material is RNA. “Another technique we used was metabolomics, to confirm which metabolites the microorganisms were producing,” Persinoti said. “Combining all this information from omics, bioinformatics, and actual and potential gene expression, we were able to decipher the role of gut microorganisms in achieving such highly efficient conversion of plant fibers and to find out which genes were involved in the process.”

They then analyzed all this data to identify genes that could play a key role in reducing plant fiber recalcitrance, focusing mainly on hitherto unknown targets. “The selection strategy focused on novel genomes with an abundance of genes involved in plant biomass depolymerization,” Persinoti said. “We saw how these genes were organized in the genomes of the microorganisms, and leveraged this information to find out whether there were nearby genes with unknown functions that might be involved in breaking down recalcitrant plant fiber. This is important because it guides the search for novel genes, but only when we were able to demonstrate these results experimentally at a later stage could we establish the creation of these novel families of enzymes.”

Having identified these candidates, they moved on to a biochemical demonstration of their functions. “We synthesized the genes in vitro and expressed them using a bacterium to produce the corresponding proteins,” Persinoti said. “We performed several enzyme and biochemical assays to discover the functions of these proteins and where they acted. We determined the proteins’ atomic structures using synchrotron light and other techniques. With this functional and structural information, we were able to do other experiments to find out which regions of the proteins were critical to their activity and analyze the molecular mechanisms underlying their functions.”

According to Murakami, dual validation ensured that novel families were indeed involved. “We selected a gene not very similar to one we had studied previously in the set of sequences that theoretically formed the universe of a newly discovered family. We synthesized the gene, purified it, characterized it biochemically, and showed that the sequence had the same functional properties as the previous one,” he explained. “In other words, we characterized a second member of the new family in order to be absolutely sure these proteins did indeed constitute a novel family.”

Persinoti revealed that one of the newly discovered families called GH173 has potential applications in the food industry, while another called CBM89 is associated with carbohydrate recognition and could facilitate the production of second-generation ethanol from sugarcane bagasse and straw.

The researchers are also developing enzyme cocktails with enzyme-hyperproducing fungi, and the newly discovered enzymes could naturally be included in these fungal platforms. “The discovery of novel enzyme families can be integrated with the transfer of technology to support innovation,” Murakami said. “In our group, we’re very interested in exploring this great Brazilian biodiversity treasure, particularly to understand what we call dark genomic matter – parts of these complex microbial communities with unknown potential. Our center has excellent infrastructure for this purpose and, together with our partnerships with public universities, this has enabled competitive research of this kind to be done in Brazil. Indeed, 99% of the work, from conceptual design to execution, analysis and writing up, was done here. Given the immense richness of Brazilian biodiversity, it was only to be expected that we would have the conditions and capabilities to make high-impact discoveries such as these.”