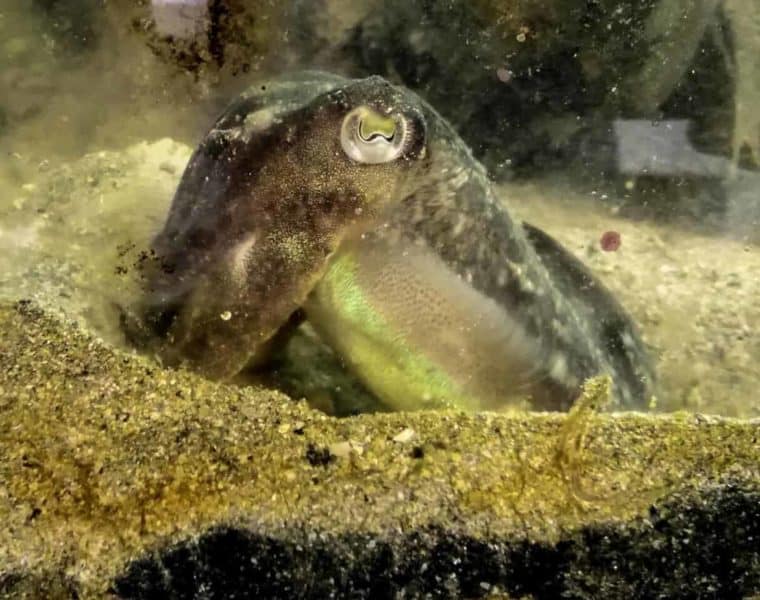 A new study by City, University of London and others suggests that the European cuttlefish (sepia officinalis) may combine, as necessary, two distinct neural systems that process specific visual features from its local environment, and visual cues relating to its overall background environment to create the body patterns it uses to camouflage itself on the sea floor.

This is in contrast to previous research suggesting that the cognitive (brain) processes involved are much simpler, in that the cuttlefish adopts one of only three major types of body patterns to visually merge with its background. However, that does not explain why the animal possesses about 30 different body pattern components it could use to achieve this.

The  study explored whether the cuttlefish uses a cognitive process that is triggered by specific, visual features in its environment and which warrants the number of body pattern components it possesses.

Like their cephalopod relatives the octopus and the squid, cuttlefish are masters at blending in with their environments, which is largely attributable to the way their brains are able to control how pigments in special cells called chromatophores on their skin are displayed across their bodies.

In the study, 15 European cuttlefish were independently acclimated to a small water tank in which they were randomly exposed to either a uniform, grey background, or one of seven backgrounds with detailed, patterned features (e.g., small black squares, small white squares, white stripes). The animals’ camouflage responses to these visual cues were photographed with a camera, and then analysed to see which of the 30 body pattern components appeared activated across the sample of test subjects.

The analysis included a statistical technique called ‘principal component analysis’ (PCA) which searches for clusters of responses in the observed data and attempts to largely explain it with a reduced set of key characteristics of the data.

The results of the PCA found that a few key characteristics did not explain most of the variability in the experimental data, but which would have been expected if the cuttlefish were employing a cognitive system which was expressing only three body patterns. Instead, the findings were more in line with a system whereby the whole range of the animals’ body pattern components could be activated, but selectively and in limited numbers, in response to the patterned feature they had been visually exposed to in the water tank.

Whilst the study findings are preliminary, they are in line with a model in which European cuttlefish do employ a cognitive system that processes specific visual features of the environment, and which is used in combination with a system which responds to the visual background overall. Furthermore, a model in which the visual feature system is implemented in a hierarchical fashion (i.e., when needed, to fine tune a basic response to the overall background), in order for the animal to create the myriad camouflage responses used on the sea floor.

Christopher Tyler, Professor of Visual Science at City, University of London and who co-authored the study said:

“The cuttlefish provides a fascinating window into perceptual processing of such an alien species by expressing its perception of the surroundings on the dynamic canvas of its skin surface.

“The findings also lay the groundwork for further study to investigate which specific aspects of the patterned features used here are responsible for activating distinct groups of body components in cuttlefish, and indeed, whether these artificial visual cues are reflective of what is encountered in the animal’s natural environment.”

The study is published online as a corrected article in press, ahead of issue in the journal, Current Biology.