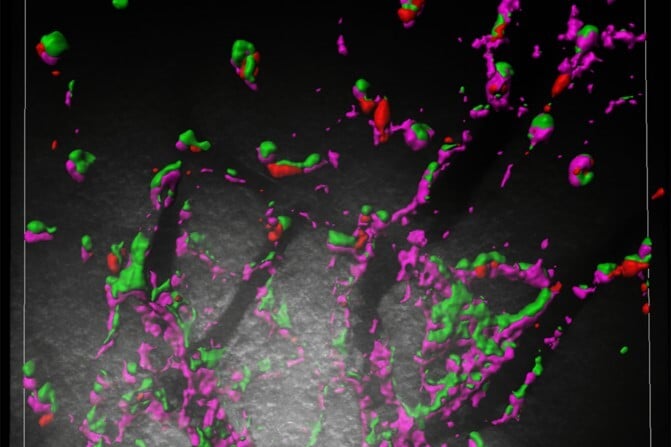 The RTL6 proteins, shown in green, guard the mouse brain capillaries (the branch-like structures in black) against ‘infection’ by clustering around the magenta-coloured bacterial mimic.

From the common cold to COVID-19, viruses have a massive impact on our day-to-day lives, but infections that occurred millions of years ago have shaped our evolution.

This is because viral genes have been incorporated into the DNA of the infected host and then passed down the generations, often developing different functions over time. Now, in a study published in Development, Dr Fumitoshi Ishino, Professor of Molecular Biology at Tokyo Medical and Dental University, Japan, and Dr Tomoko Kaneko-Ishino, Professor of Molecular Biology at the Tokai University, in Kanagawa, Japan, have discovered that two mouse genes, left behind by a viral infection millions of years ago, have evolved to help defend the brain against new infections.

The genes in question, known as ‘retrotransposon Gag-like’ 5 and 6 (Rtl5/Rtl6), are carried by almost all mammals, and are similar to genes found in retroviruses, such as HIV. The researchers were convinced that the genes must be doing something important, as despite coming from viruses, these inherited viral genes have been preserved in the mammalian genome for at least the last 120 million years. To work out what these genes are doing the scientists needed to know where they are active, so they looked for RTL5/6 proteins, which are only produced when genes are switched on. They discovered that Rtl5 and Rtl6 are switched on in the brain in cells called microglia, which act as the ‘first responders’ to infection. Dr Kaneko-Ishino said, “we never expected that Rtl6 and Rtl5 would function in microglia when we started this work 15 years ago, and even when we knew that Rtl6 was a microglial gene we didn’t understand its significance. Our ‘eureka moment’ came during a dissection when Dr Ishino was carefully removing a mouse brain. We realised that if instead we damaged the brain, we could activate RTL6”.

The team set up fake infections in mice brains to test how the microglia producing RTL5 or RTL6 would respond to either bacteria or viruses. They found that microglia containing RTL6 protein responded to the bacteria-like mimic, whereas the microglia with RTL5 reacted to the simulated viral infection. In addition, when the researchers removed the Rtl6 gene, they found that the mice could not eliminate the fake bacterial infections, while the mice without Rtl5 could not clear the viral mimics, meaning that together Rtl5 and Rtl6 protect the brain against two of the most common types of infection.

These results provide the first example of viral-derived genes that have been re-purposed to protect mammalian brains against infection. The idea that viruses have had such a positive impact on our lives may be surprising, but examples like Rtl5 and Rtl6 demonstrate that viral invaders can, in the long run, benefit their host. According to Dr Ishino, “virus-acquired genes are essential parts of our genome, playing various – but essential – roles in mammalian and human development. We think it is possible to extend this idea to primate- and human-specific acquired genes from retroviruses to help us understand human evolution”.