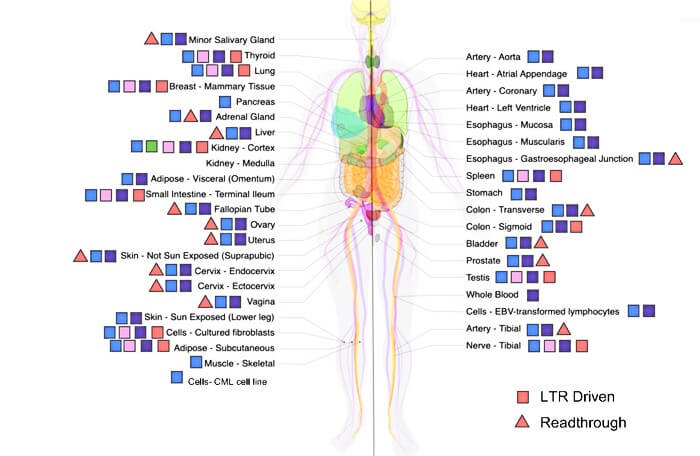 HML-2 ORF Transcripts in the Human Body: This map of the human body (adapted from the GTEx consortium website with permission) displays the possible expressed Human endogenous proviral HML-2 ORFs in each tissue sampled. Blue shapes represent Gag, green represent Pro, pink represent Env and orange/purple represent Rec and Np9 respectively. A square indicates expression due to read through transcription from an adjacent or surrounding gene or otherwise undetermined. A triangle demonstrates LTR driven transcription of viral ORF shown. This map displays the wide range of HML-2 viral ORFs that could be transcribed throughout the body in non-diseased tissue.

Remnants of ancient viruses in the human genome are active in healthy tissues as well as diseased ones, limiting their utility as disease biomarkers, according to a study by Aidan Burn at Tufts University in Boston, USA and colleagues, publishing October 18th in the open access journal PLOS Biology.

Viral infection of sperm or egg cells can result in viral genes being permanently incorporated into the host genome, and the genetic remnants of ancient viruses — known as human endogenous retroviruses (HERV) — make up about 8% of the human genome. Although no longer infectious, some HERVs still contain intact genes, and the production of HERV RNA transcripts in human cells has been linked to some cancers.

However, HERV expression in healthy tissues has been largely unexplored. To address this knowledge gap, researchers used RNA sequence data from the Genotype Tissue and Expression project to investigate the presence of transcripts belonging to a recent HERV subgroup, HML-2, in non-diseased tissues. This database includes gene expression data from 54 different tissue types collected from nearly 1000 individuals. The authors detected HML-2 transcripts in all tissue types, with elevated levels in cerebellum, pituitary, testis, and thyroid tissues.

The results demonstrate that HML-2 activity is not limited to diseased or cancerous tissues, and this has important clinical implications. For example, the use of HML-2 expression as a cancer biomarker, or a target for therapeutics, would need to account for background expression in non-diseased tissues. More evolutionarily ancient HML-2 viruses showed the highest expression levels in human tissues, which may indicate that the activity of younger, less-degraded HERV fragments containing complete protein-coding sequences may be repressed by cells to prevent production of harmful viral proteins, the authors say.

John Coffin, the senior author, adds, “We have found that nearly all normal human tissues express, in their RNA, one or another of about three dozen endogenous proviruses, remnants of widespread retrovirus infection of our distant ancestors. We expect this finding to provide a basis for further studies to understand the role of these elements in human biology and disease.”